Getting The “L” Out In The UK 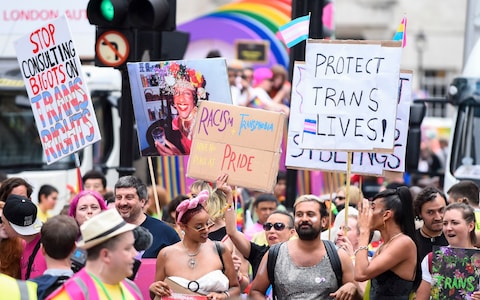 Europe’s biggest LGBT rights organisation has split after being accused of promoting a “trans agenda” at the expense of gay and lesbian rights.

Stonewall is known for campaigning for the equality of lesbian, gay, bisexual and trans people across Britain. The charity’s mission statement says that it aims “to create inclusive and accepting cultures”.

However, following a meeting on Tuesday night – and amid an ongoing row about trans inclusion – the charity has divided and forged a splinter group.

Announcing themselves as the LGB Alliance, the group, formed of “influential lesbians, gay men and bisexuals” met in central London last night and forged the new organisation in a bid to “counteract the confusion between sex and gender which is now widespread in the public sector and elsewhere”.

Simon Fanshawe, who co-founded Stonewall in 1989, was among those speaking at the event last night in central London.

In a press release announcing the new group, which will be formally launched in January, the LGB Alliance said that its participants included former employees and supporters of the lobby group Stonewall, as well as doctors, psychiatrists, academics and lawyers with expertise in child safeguarding.

It added that all members had agreed a foundation statement which prioritised biological sex over gender theories which they regard as “pseudo-scientific and dangerous”.

Bev Jackson, a co-founder of the Gay Liberation Front, said: “LGB people like us have been writing to Stonewall for over a year – trying to set up a dialogue with them. It’s about the fact that they have chosen to prioritise trans people and have almost abandoned their original mission: protecting people who are same-sex attracted.

“Sadly, we do still need protection. Young lesbians in particular are suffering; experiencing huge social pressure to transition to male if they do not conform to traditional gender stereotypes.

“Almost 10,000 people have signed our petition – asking for calm, respectful discussion. Stonewall has stonewalled us every time. So it’s time to set up an alternative organisation.”

The new group said that it was formed following a refusal by Stonewall, which was originally set up to fight legal discrimination against gay men and lesbians, to respond to a petition asking it to acknowledge the range of valid viewpoints around sex, gender and transgender politics.

LESBIANS AT GROUND ZERO: LESBIANS AND THE COTTON CEILING