Til The End Of Time

Back in the Forties there were booths at carnivals and fairs where you could make a record of yourself singing. My mom loved the song “Till The End Of Time'” and recorded herself singing it. I played it over & over. I was haunted by the sound of her beautiful voice and the ponderous Mozart tune. My mom died of cancer from exposure to the first high doses of hormones they fed to pregnant women in the Fifties. She was 29. I was 12.

I am a survivor of multiple extreme prolonged trauma. I won’t go into the details here, but I want to note that throughout my life I have had a foreshortened sense of the future. I never thought I would live to age 18, much less survive until the hoary age of 61. 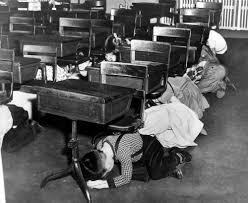 One of the traumas I survived was the terrorism of air raid drills that were held regularly at my school in the Fifties. At the drop of a hat, at any moment, we were reminded that a bomb would probably fall on us and destroy the whole city. This was a very powerful conditioning method that was intended to turn me into a good citizen. My first memories include the nightmare of standing out on Niagara Falls Boulevard in the middle of the night after the Big One has fallen and I am the last person left alive on Earth.

This is a  millenarian culture. I grew up immersed in cultural narratives about the end times.

I’m kind of a science nerd and my great love is natural history: geology, botany, biology, that kind of thing. Looking at pond scum under microscopes just for fun. I was the kid who brough home tubfuls of frog jelly eggs to watch them hatch (and who then forgot about them so they dried up.)

Another early memory was standing on the bottom of the gorge at Chestnut Ridge and feeling a creeping sense of horror as I watched brown foamy washwater from people’s washing machines choking out the plants and animals. Shortly after this they took the phosphates out of laundry soap, but a precedent had been set: people’s activities and needs came before the needs of the natural world.

I have been studying the changes that are happening to the biosphere for my entire life. I watch the sky, I spend hours out in the woods looking at the soil, the trees and plants, the habits of the animals. I have been watching the glaciers melt and the gas leak and the oil spill and the climate change.

But somehow it remained abstract. There was no definite date for the end of the world.

Certainly, as a mortal human I have had to consider my own death, what it will be like to lose everything, to never see the faces of my loved ones, never to see a butterfly or pet a cat again. I felt sadder for my mom losing everything and going into the darkness than I did for myself in losing her. And, of course, this death could have, still could, claim me at any moment. We all live under the Sword of Damocles in that respect. But even in this individual demise there was always the small reassurance that something would go on, human life, the life of the planet would continue after I was gone. And if I was very lucky and very diligent I might even leave some work of art behind for future generations to marvel at.

Even when Chernobyl and Deep Water Horizon and Fukushima and similar horrifying industrial disasters happened, it was still not quite yet, we are still slogging along.

Now, however, I have a date for the end of time. It is 2048. That is the date that scientists have cited as the year that the ocean dies. Here are links from reputable outlets such as The National Geographic:

It it one thing to consider one’s own demise. It’s sobering to think about the end of time that takes place at some indeterminate time in the future. It’s quite something else to find out that life on Earth will definitely come to an end in 2048, when the ocean is so polluted that it can no longer support life. No ocean, no people.

I am feeling very peculiar. This is compounded by the fact that everyone around me is oblivious to these facts and they will not talk to me about what is happening. Everyone is proceeding as if they can still make their materialistic dreams come true. When in fact, they will not see their children become parents themselves. My grandchild now in my daughter’s womb might live to age 30 if they are very, very lucky.

Needless to say, I am having a difficult time coming up with motivation to do anything at all. I am an experienced hand at grief and trauma but this is unlike anything my poor mortal mind has had to contend with before. There is no posterity. There is no future. There will be no pockets of humans hiding out in a cave somewhere who will rekindle culture when the Earth heals itself. God is not going to rescue us. Jesus is not coming to vacuum out the miles and miles of ocean choked with plastic bits of useless shit we all just HAD to have. Aliens are not coming in spaceships to teach us how to cool the planet. Spiritual Beings are not arriving from parallel dimensions to usher in a new age of peace and understanding and ecological consciousness.

This changes my priorities. I tossed out my manila sheets that I cover with my goals and plans. I am not going to write that book. In a few years there will be no-one to read it. I am not going to get a job at a sandwich shop so that I can afford extras on my SSI,  like clothes. No more shit jobs making the rich richer as the planet gets ground up, sold, and then dumped into a toxic waste dump that empties directly into Mother Sea. We killed Our Mother, our mothers, our daughters and sons.

It never mattered, ever, what I did or said. I was born onto a dying planet. It was in the process of dying already when I was born and there was nothing I could have done to turn this outcome aside. I do know I am not suicidal. I want to keep on living as long as possible. I’m glad I gave up my car and that I eat real food and I still believe in social justice, whatever that may mean, as the culture falls and becomes more violent. Because I still have to live according to my values even if it never made any difference and makes no difference now, here, at the end of time.